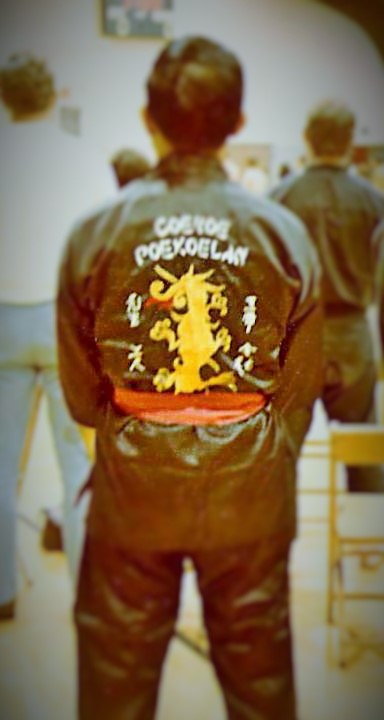 My name is Mike Kline. I was a student and eventually a teacher at the Beaver County School for the Oriental Arts of Self Defense in New Brighton, Pennsylvania in the early - mid 1960's. The school later relocated to a rehabbed factory in Beaver Falls, PA. This school was owned by the Dutch-Indonesian Master William John Christopher Wetzel. "Willy" had been a student of a WuDang Chinese Master Oei King Boen, who had fled mainland China due to the Boxer Rebellion purges. Willy eventually earned his status of a Ninth Degree Golden Dragon Master. [Not 9th degree black belt]. During this test he had to engage in mortal combats against multiple killers. He was required to kill at least one of these enemies; Willy killed three. This was a time period in Indonesia where jungle fighting and warriors prevailed. Officially Willy was known as a Dutch Poekoelan Master as well as a Chinese Chuan Fa Master. There are so many lies and exaggerations written about this unique deadly martial art and Willy, that I decided to write this blog. Firstly, this was not intended to be a form of karate or kung fu for the purpose of sparring and fighting, nor for mixed martial arts cage fighting. The primary focus of Willy's Original style is to maim and kill the enemy. Compassion was never a consideration. The name tulen was never said, but added later by one pendekar.  Willy had issued a mandate to all of his students, that they were required to kill our attackers especially if we were expecting to lose a street fight. Willy was murdered by his son in the mid 1970's. Since then, his style has sadly been polluted and diluted to the point that it is no longer the Original Poekoelan - Chuan Fa style, also known as Poekoelan Tjimindie Style. Other spurious martial arts systems copied some of what Willy taught, but I do not believe that these clearly understood the absolute application of ferocity and ruthlessness as we learned. Willy Wetzel's style was intended to utterly defeat all common Indonesian silat styles. The real Poekoelan is Dutch, not really Indonesian; although the Indonesians copied Poekoelan into their styles and renamed it cimande and pukilon. There are primarily five combat methods within this style: 1. Tiger fighting (low and ground); 2. Crane fighting; 3. Ape fighting (lampong gorilla and monkey); 4. Snake fighting (cobra and python), 5. Dragon. There were elements of Northern Chinese kicks and Low Chinese stances combined with hand methods. Other animal combat forms were also used including Kangaroo, Cat, Rooster, Eagle, Bear,  etc.. There were some hard style methods, but overall it is a fluid high velocity killing and joint destruction method involving mayhem such as eye enucleating techniques. It had a religious Chinese Taoist influence; not Buddhist. Indonesian demon worship was a minor influence.


I will add to this new blog as time goes by.